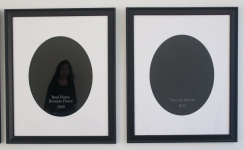 Hate crimes have occurred on United States soil for well over five hundred years. Racism and prejudice spurred by ignorance, hatred and fear continue to claim victims well into the new century. Every year, many victims are shot, beaten, dragged, tortured, assaulted, maimed, or murdered from a hate crime. The Federal Bureau of Investigation began recording Hate Crime Statistics in 1997. From 1997 to 2011 there were 104,051 reported crimes against persons, with 153 of those being murders.

My project “I Am…” focuses on victims murdered from a hate crime in the United States. Currently, the growing project consists of twenty-five 30” x 24” simple black frames, each which contain an oval portrait mat resting over a mirror-like black acrylic. Engraved on the front clear acrylic overlaying the mat and black acrylic is the name(s) of the past hate crime victim(s). When the viewer stands in front of the frame, they see their own reflection in the black acrylic within the portrait oval above the name(s) of the victim(s). One intention with this project, with solemn reflection of the viewer within the frame, is to suggest that hate crimes can happen to anyone. My other intention is one of remembrance and sorrow for the innocent lives destroyed by hate.