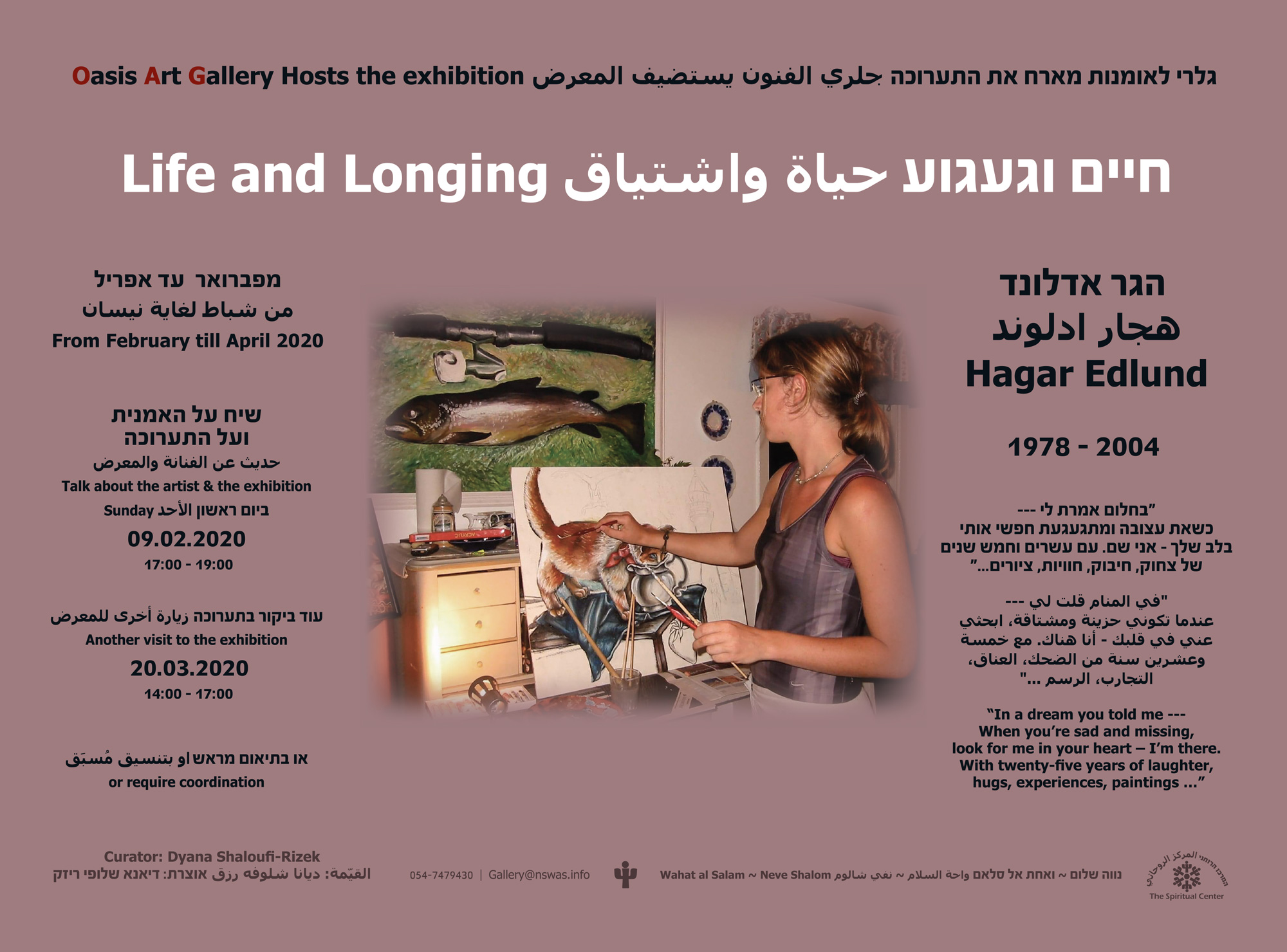 On Sunday Feb. 10, the Gallery opened an exhibition of the artwork of Hagar Edlund, who grew up in the community of Neve Shalom/Wahat al Salam, and was living here at the time of her early death in 2004.

At the opening, the gallery was crowded with people from the village and from outside. We were accompanied by mixed feelings of loss, wonder and fascination. Thanks to all who attended and who donated to support the activities of the gallery.

Born in Sweden to an Israeli mother and a Swedish father, Hagar spent most of her childhood and adolescence in Wahat al-Salam – Neve Shalom, with regular visits to Sweden. She spent her adult life in Israel, Sweden and the world.

Hagar was talented and active. From a very early age, she painted and created. She excelled in many sports including basketball and other ball games, skiing and ice skating. She was a sports and swimming instructor and lifeguard.

From the age of fifteen, while attending high school, she worked for many hours to save up for her passion to see the world. During her short life, she managed to visit Japan, India, Nepal, Thailand, Australia and naturally Europe.

Throughout her life she loved animals, and treated them with the utmost concern and humanity. But above all, she loved people. She was friendly, full of love for her friends, always offering help to those who needed it.

In Sweden she studied industrial design and, as a member of Jews for Peace in Palestine, she lectured throughout the country accompanied by a Palestinian friend, with whom she also appeared in the news media.

During her high school years, as a sensitive young girl, Hagar began to use marijuana. She played down its importance, saying that half the country is on marijuana and that it is less dangerous than cigarettes. Indeed, she gave up smoking tobacco. However, over time, her marijuana use grew and became a problem, as Hagar herself understood. In November 2003, she experienced a period of great emotional distress. A psychotic attack following marijuana poisoning developed into depression, from which she was unable to emerge.

Hagar’s artistic style varies from period to period, markedly towards the end of her journey. She drew the animals she loved, and experimented with many techniques and methods throughout her years of high school. During the art syllabus she attended at Tzafit High School, she painted many nudes from figure models.

With great talent and energy, Hagar painted expressionist portraits, taken from photographs of people around the world. Her work is characterized by strong facial expressions and use of vivid colors, though other works are in monochrome.

She returned to the same impressionistic style with the prominently-sized paintings of two pharaonic cats, which are indicative of her high creative abilities.

Looking at Hagar’s paintings, one can see that she was exposed to various artistic styles and did not hesitate to harness her knowledge in her artwork, even daring to mix different styles in the same work.

During the last period of her life, Hagar painted and expressed herself emotionally. The paintings themselves become a measure and assessment of her personality and psyche. Hagar painted animals in an unconventional symbolic style that is beyond a realistic representation and even surrealist art style. Details and information are sometimes left unrelated to other parts of the same work, while their symbolic and mental connection exists and remains.