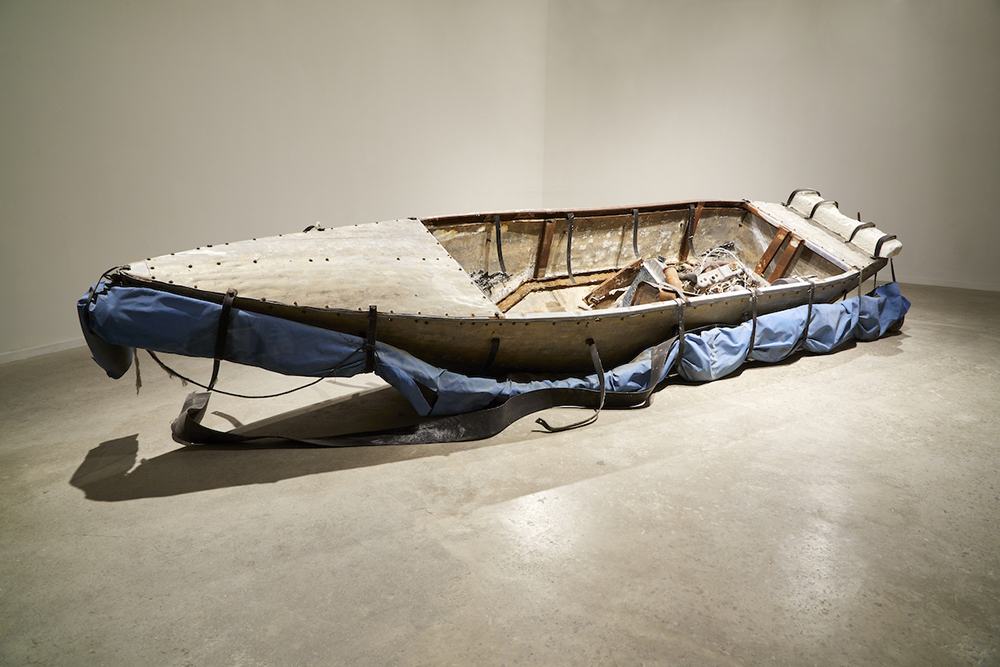 100 Years All New People (previously Paradise Begins With a Shipwreck)

The visual material in 100 Years, All New People is relocated from passages in the United States that circumvent standard immigration control by providing discreet border crossing for asylum seekers. This project was exhibited at SPACES in Cleveland from Jan 17th to March 13th, 2020. Untitled (chug) is an example of a hand-made boat built with the express purpose of traveling the quasi-legal 90 mile journey from Cuba or Haiti to the United states. In 2017, I sourced and towed this vessel from an uninhabited island twenty miles off the coast of Florida. Permission to relocate the boat necessitated working with local sailors, marine salvage companies, The US Fish and Wildlife agency and lawyers. One week after the boat was salvaged, the rest of the migrant vessels in South Florida were destroyed, ending a visual chapter and living archive of migration. Included with the vessel in the exhibition is a 3 minute video loop of the boat’s journey from The Marquesas Islands to the mainland. Coda is a set of footprints set directly into the Northeast end of the concrete floor at SPACES. The footprints are from a series of forensic casts I took at the Canadian border, documenting refugees’ last contact with American soil from 2016-2020. It was cast at one of two farm roads that allow circumvention of the Third Safe Country Agreement, allowing for a potential second chance to claim asylum in North America when denied in the port of entry. Under the current administration, there has been a tenfold increase in illegal migration into Canada. 55,000 people of broad national origin have walked across this border, seeking asylum in Canada. The last item in the exhibition is a screenprint of an archival New York Times article from 1922, reporting the arrest of three Jewish illegal immigrants deported to Cuba from Key West. There is a personal connection to the issue of migration. My great grandparents were refugees who migrated to the United States to escape increasingly severe state disenfranchisement of the Romanian Jewry. Twenty years later, the immigration quotas in the United States limited the number of Romanian Jews that could legally enter the country, leading to the suffering of Eastern European Jews in Europe and the illegal smuggling of Romanian Jews through Cuba. I hope these parallels are timely, and call for an increased tolerance and embrace of economic and political refugees.

Link to review in Hyperallergic:

Included as part of the exhibition, was a public talk at Cleveland Institute of Art on Jan 17th.