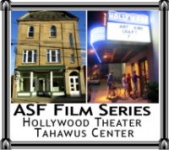 Tahawus Center designed, created and executed the marketing and PR campaign and film selection to launch in June 2015, the NEW alternative film series at the Hollywood Theater in Au Sable Forks, NY.

After the successful “Go Digital or Go Dark” campaign of 2014 in which Tahawus partnered with the Adirondack North Country Association and the Hollywood Theater, our small town movie house was able to purchase and install two digital projectors. On the brink of closing its doors forever, it now continues its beloved business of entertaining the families, individuals, and visitors of our upstate New York region.

In 2015, the Tahawus Center began a new collaboration with its neighbor, the Hollywood Theater playing the key role in designing and launching the new film series devoted to cultural, educational, foreign, independent, classics and shorts. Owners of the Hollywood Theater, Sierra and Cory Hanf, agreed, saying, “This collaboration increases the breadth of programming in the Ausable Valley and brings diversity to mainstream fare. Community members of all ages benefit from the prolific amount of arts programming that was heretofore sorely lacking in the area.”

Au Sable Forks and the surrounding area is rural, and well below the economic average. Like many small hamlets between mountains, it suffers from problems of isolation. Tahawus Center, established in 2009, is a cultural magnet for the community, attracting the curious through innovative programs and initiatives, and by opening its doors to artistic and education expression.

The ASF Film series strengthens Tahawus in our own mission: to be a place where the art world and the village community engage with innovative projects; a flexible, entertaining, gathering place, committed to serving the community and surrounding area, while opening a window to artistic and education expression. The arts enable us to confront unexamined assumptions. They challenge and make us less sure of our virtue.