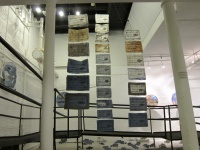 “Boston Don’t Dump” is an environmental art project by international artist Jane Ingram Allen, from the USA and living and working in Taiwan for 8 plus years since going there in 2004 as a Fulbright Scholar artist in residence. For the “Boston Don’t Dump” project Jane created a new series of handmade paper artworks focused on the environmental issue of clean water and urban runoff and pollution of Boston’s waterways. The project began on June 29, 2011, with a two-week artist in residency at the Distillery Gallery, South Boston, MA, to create the artworks and involve the public in open studio sessions with the artist. The public was invited to join the artist in making handmade paper and putting the wet newly formed sheets to dry on the metal sidewalk signs found on many Boston corners that say “Don’t Dump – Drains to Boston Harbor” or other Boston waterways. Open Studio Sessions were held in the lobby gallery space at the Distillery Building from 10 AM to 12 Noon and from 2PM to 4PM, on June 30, July 1, July 2, July 5, July 6, July 7 and July 8. An exhibition of the works created during the Distillery Gallery residency, along with related works made in Taipei, Taiwan, on city manhole covers, opened on July 14 and continued through August 13, 2011, at Distillery Gallery. An opening reception and gallery talk by the artist was held on Thursday, July 14, 6-8 PM.