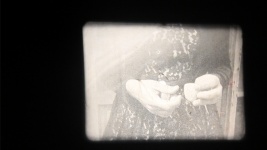 Buffalo: Rule of Three is a moving image investigation on history, personal narrative, and transgender. Buffalo, New York has a complicated and diverse narrative in feminist, lesbian, transgender and working class history. In the early 20th century those that paved the way for artists and individuals such as myself were gathering, creating a culture of resistance and living their lives in Buffalo.

It is my intention to use not only the research and information I know about these communities, but to also envision beyond the boundaries of established materiality, into a creative imaginary of unexpected theories and representations.

As a transgender person with roots in the working class lesbian community, it is up to me to create a personal historical narrative as an artist. Because those that came before me faced enduring violence and repression, their lives are often hidden or unknown. I seek to place myself in connection with both real and fictitious elements of FTM transsexual, working class history.

This moving image project is my earnest craving for a personal historical narrative.

The Rule of Three is a structural inspiration for this investigation on many levels. The rule of thirds comes into play when framing an image, the comedic triple, the three-act structure of film narrative, and philosophical trichotomy. Particularly Kant’s categories of modality: possibility, existence and necessity.

At this time there is a explosion of research based work arriving in the discourse of a new expressive gender non-normative lived experience. It is with great responsibility and eagerness that this body of work, as gathered filmic research joins that dialogue.