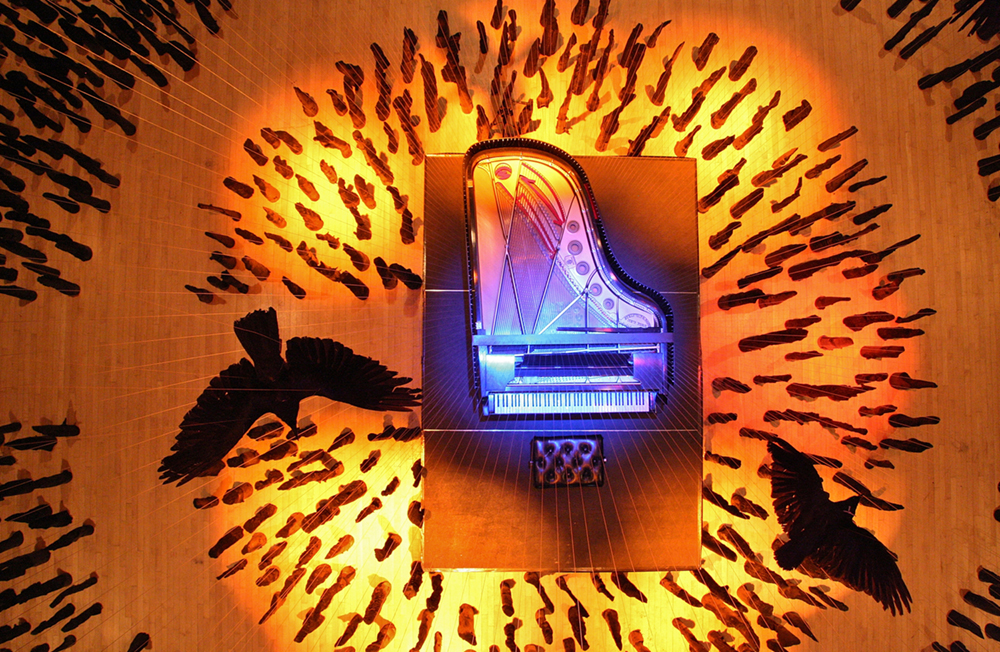 In 2013, during the opening reception of my exhibit, Virga: the Hunt for Water, pianist Janice ChenJu Chiang approached me and asked if I would ever consider having someone perform inside one of my installations. That question initiated the preparation and eventual culmination of Composition for Forests.

To prepare for this project, I asked Janice to read The Raven by Edgar Allan Poe, which became the conceptual kernel behind the installation and her performance. Lenore, the lamented and lost love in the poem, symbolized for me, Mother Earth, as I attempt to make something beautiful out of a traumatic, and at times, a terrorizing event – catastrophic wildfire caused by a hundred years of fire suppression and global warming.

And the lamp-light o’er him streaming throws his shadow on the floor;
And my soul from out that shadow that lies floating on the floor
Shall be lifted- nevermore!

In January 2014, I sat in the Ashurst Recital Hall listening to Janice perform in a concert. Her music inspired me to start drawing out a composition for an installation that allowed the audience to walk around while Janice performed, something that Janice had wanted to happen. During this same time, I was also asked to be the curator of the exhibition, Fires of Change. As I prepared for that job I delved into the science behind the beliefs that I had acquired twenty-five years earlier while in art school — of fire’s vital importance in sustaining healthy forests.

Wildfires can both rejuvenate and devastate a landscape; they can be an ally and an enemy in the forests we live in. They are natural processes that have shaped many ecosystems in this region for centuries. Dry conifer forests of the Southwest burned frequently with low-severity and mild effects. In a warming climate with unnaturally dense stands of young trees from past management practices, high-severity fires can create treeless patches so large that forests are not likely to return. On the other hand, maintaining a regime of frequent low-severity surface fires can help create forests that have a better chance of surviving droughts and our changing climate.