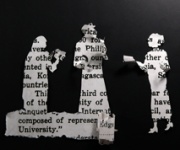 I created Crossing Paths to be shown on the four screens of e4c, one of the storefront galleries of the arts organization 4Culture, in Seattle. Because the video can be seen in the storefront window, and heard on speakers outside the window, the audience is large and varied, including commuters, tourists, casual passersby and people living on the street.
Crossing Paths is a moving collage made up of figures cut from paper records that might relate to people passing by or watching from the sidewalk, or to their ancestors.
My research included exploring newspaper and other archives. I chose short selections from newspapers, books, letters and other paper documents, historical as well as more recent. Many, but not all, of the texts I chose relate directly to Seattle. They are not intended as a history, nor are they arranged in chronological order, but rather to suggest an interweaving of experiences, similar and dissimilar, across time.
Each short text remains on a screen for long enough to be read by the viewer; paper figures cut from the page then begin to emerge and to cross from screen to screen, interacting with paper “characters” from other times, places and situations.
Honduran sweatshop workers from the 1990’s meet Chinese railroad workers from the 1880’s, university students from the 1920’s and many others. Even though the characters are simply paper figures cut from the texts, their stories are told with poignancy and humor. With an original musical score written by Jeremy Mage, the video engages the viewer, brings life to the words on paper and evokes a sense of interest and empathy.