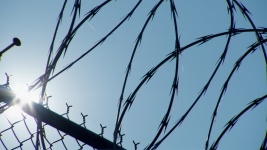 Drugs, armed robbery and murder landed them in prison. Having worked their way from maximum to minimum-security, six inmates attend literature and creative writing classes as they await their release. Class discussions and interviews with the inmates, their university instructors and prison staff paint a layered picture of life behind bars and in the ivory tower.

Over the course of the documentary, we get to know Dan, who combines the concept of Chekhov’s gun with the detective story device of the red herring to write about blueberry pie, Lionel, an aging musician who draws a parallel between his decades spent behind bars with the predicament of Beckett’s Didi and Gogo, in WAITING FOR GODOT, Josh, who went to prison at 15 and now, 17 years later, is about to return to society with an appreciation of painting and literature that he treasures more than his basketball skills, Alphonso, who entered prison with a third-grade reading level twenty-seven years ago and now can tackle post-high school texts, Scott, entering his fourth decade in prison, who compares himself to Raskolnikov in Dostoevsky’s CRIME AND PUNISHMENT, and Daniel, a Chicago gang banger who comes to value women through Tolstoy’s ANNA KARENINA.

Colleen, Janelle, Jose and Zach, all graduate students who volunteer their time, make a passionate case for the importance of the humanities in an academic world that values technology over face-to-face talking. Whether you agree with them or not, their efforts inspire the inmates with hope and the possibility of redemption.