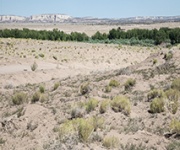 Springs are a key source of life in the desert and may function as keystone for other ecosystems. Rivers in the desert cut through layers of rock, and are often dammed to create artificial reservoirs, while natural lakes are rare. Each form of water struggles to persist within an ever-drying land. These photographs are of natural springs of all types, their surroundings, natural and human-made lakes that are in the midst of drying up.

Water in dry landscapes is an important topic for everyone who contemplates living in the driest areas of the Western US. The deserts of Arizona, Nevada, and New Mexico have a long and turbulent history of settlement and, due to drought, evacuation. John Wesley Powell, the 19th century explorer of the American West and a director of the US Geological Survey, believed that the west was too arid for agriculture and wide settlement, except for the very small portions of the land near water sources. Since the prevailing thought of the time was Manifest Destiny, the idea that people were meant to settle the West, no one took seriously the conservation ideals of Powell. They ignored his warnings – populating the west in large numbers. The population continues to grow today. Scholarly research shows that ancient peoples who lived in these dry climates were, as we are today, adversely affected by drought cycles. Despite the appearance that we have conquered nature, we live in deserts at the mercy of the climate and the existing water resources of the area.

My project uses photography to illustrate the relationship water sources to the land that surrounds them. It is water that brings the energy of life. Without it habitats would support little plant life. I enhance color vibrancy in the riparian areas of my photos, and desaturate the colors in the surrounding drylands. Through this technique my photos will emphasize the contrast in scope between the vastness of dryland and the limited amount of water. I want to use visually provocativ