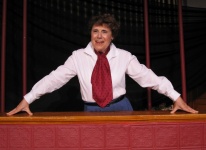 The audience meets Goldman (1869-1940) on December 20, 1919 at Ellis Island as she awaits deportation to Russia, the country from which she had emigrated as a teenager. As Goldman, Lable reminisces and enacts scenes from her life as an impoverished Jewish seamstress; a union organizer and fiery public speaker; and an anarchist, accused of plotting with Alexander Berkman, her lover, to kill the union-busting industrialist Henry Clay Frick. The Panic of 1893 set off the worst economic depression the U.S. had experienced up to that time; Goldman spoke to huge crowds of frustrated, unemployed workers, telling them to demonstrate “before the palaces of the rich.” For her unrelenting activism and pursuit of justice for workers and women, Goldman was deported under the Anarchist Exclusion Act of 1918.

Since its run in Cape May, EMMA has performed at Congregation Rodeph Sholom in NYC, the Mahwah Public Library in NJ, and Metropolitan Playhouse in NYC with funding help from The Puffin Foundation, Ohio State University, and libraries and clubs in Manhattan.

One reviewer of EMMA exclaimed that this production, like other ELTC productions, provides “wonderful insights into characters that have made significant historical contributions to the American landscape.”