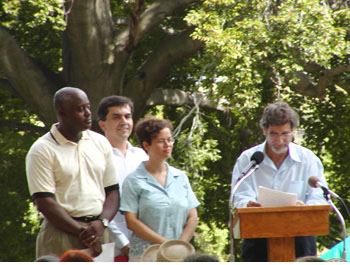 Despite segregation and brutal racial injustice during the Jim Crow era (1930s-60s), many black colleges in the South risked reprisals by opening their doors to Jewish Refugee Scholars who were blocked from entering the US by anti-Semitism and quotas, unless they had jobs waiting for them.

The history of how they succeeded is thrilling evidence of what Eli Siegel, founder of the education Aesthetic Realism, identified as “the force of ethics” working in reality and in people throughout history, and must become known. Alice Bernstein’s oral history project, “The Force of Ethics in Civil Rights,” includes over 300 video interviews with men and women nationwide. Her work as a journalist, author, and historian, is informed by her study of Aesthetic Realism, and this explanation by Eli Siegel of the cause of racism, contempt—“the addition to self through the lessening of something else,” and the answer—criticizing contempt, including in oneself, and seeing that the feelings of people different from us are as real and deep as our own! In interviews, 30 men and women who taught and studied at Black Colleges in the South, tell how their alliances led to advances in education, civil rights, and social justice. A central figure is Dr. Ernst Borinski, whose escapee from Germany in 1938, led him to Tougaloo College in Mississippi in 1947 where he taught sociology until his passing in 1983. Among international scholars he invited to lecture and teach, was a Dutch from Amsterdam, a concentration camp survivor who knew Anne Frank. Another was the African American diplomat Ralph Bunch, a United Nations mediator and recipient of the 1950 Nobel Peace Prize. One interviewee was the first black medical sociologist who after graduating from Tougaloo, returned to teach—and continues today! Also represented are a husband and wife—from Germany and Czechoslovakia—who taught at Philander Smith College (Little Rock) and Dillard University (New Orleans)—Dr. Georg Iggers (1926-2017) and Dr. Wilma Iggers, age 98, who is believed to be the sole surviving Jewish refugee scholar. (See video excerpt and broadside of photos and descriptions of interviewees.) Research includes current teachers and students from Brown University in Rhode Island in partnership with Tougaloo College, beginning in 1964–with cultural exchanges, collaborative research ventures, and administrative engagements with teachers and students who broke color barriers to become lifelong friends and colleagues.