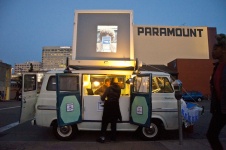 In 2015 Mobile Arts Platform (MAP) artists Peter Foucault and Chris Treggiari collaborated with Aaron McKenzie from the CCA Center for Art and Public Life, and Cole Goins from the Center For Investigative Reporting (CIR) to create Eyes On Oakland. Through the journalistic lens of community surveillance, this participatory research project and resulting social sculpture investigated ways in which Oakland communities are changing because of new economic pressures being placed on established neighborhood identities. A generous grant from the Puffin Foundation helped assist with funding for this project.

Eyes On Oakland was included in the “Who Is Oakland” exhibition at the Oakland Museum of California from April 11th – mid July 2015 and featured both an interactive information-sharing site within the museum and a mobile satellite sculpture created by transforming a classic 1963 Ford Falcon van into an information collection/re-presentation space that engaged with the public in Oakland neighborhoods.