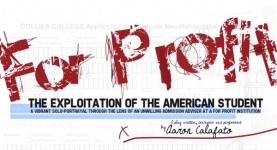 FOR PROFIT is a vibrant solo-portrayal of “the exploitation of the American college student,” and is told through the lens of an unwilling admission adviser at a for-profit institution.

The play has been performed 43 times in 6 States this year.

“The play blends theatrical techniques of storytelling and acting, in the tradition of the late monologist Spalding Gray”-The Chronicle of Education

Summary:
Months into his job as an admissions counselor at a for-profit college somewhere in the Midwest, Aaron Calafato began to grow increasingly conflicted. Responding to the college’s pressure, he says, he was signing up poorly prepared students for expensive degree programs that would leave them heavily in debt, all so he could make sure he himself had money he needed to keep paying off his own student loans. Aaron Calafato’s FOR PROFIT is an inside look at the For Profit educational industry and a vibrant portrayal of the exploitation of the American student.

Aaron Calafato is a performing artist and activist who creates solo-theater for social change and is a co-founder of Student Debt Crisis (a non-profit advocacy organization dedicated to reforming funding for higher education in America). Aaron is a recipient of a 2012 Emerging Artist Grant from The Puffin Foundation and is currently touring his original solo-piece FOR PROFIT.