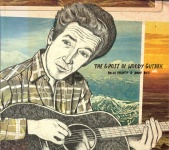 As Bucky put it: “Woody Guthrie’s been riding shotgun in my life for as long as I’ve been playing music. Our fifty-year encounter has been a friendly, spirited, and engaging conversation. though we’ve had our acrimonious stints. In honor of this lengthy road trip with Woody and his profound impact on me and the world, I decided to create this musical project. Joined by my musical compatriot-in-song Andy Dee and Mr. Guthrie looking over my shoulder, I offer a tribute to Woody Guthrie (1912-1967).”

Bucky’s double CD that pays homage to Guthrie’s impact on him over the last fifty years. The CD features 18 of Bucky’s original tunes and 4 of Woody’s as well. This project, a tribute and a celebration to Woody Guthrie, is much more. It’s an honest and frank response to living with Guthrie for so many years, performing his songs across America and Europe, reading published works on Guthrie, and doing research in the Guthrie archives. Bucky decided one day to start writing songs related to his experience with the kid from Oklahoma and before he knew it he had a batch of songs that respond to Woody Guthrie’s ghost in a variety of ways, from the literal in the case of “Woody and Mary, 1933″ and “Marjorie Dear,” to the surreal in “Miss Dickinson” and “Dream Day World.”

Bucky Halker was born in 1954 and grew up in Ashland, Wisconsin, a declining blue-collar, iron ore, lumber town on Lake Superior. At 16 he discovered Woody Guthrie, blues piano, songwriting, and solo gigs. He skipped town for college in cowtown Idaho, learned how to read, and got hooked on caffeine, cigarettes, and history books. Dividing his time between gigs and and footnotes, Bucky returned to the Midwest in 1976 and earned a Ph.D. in US labor history. Bucky’s fifteen albums feature a range of music, including eclectic originals, classic labor protest songs, and obscure Midwest folksongs. He also produced the “Folksongs of Illinois” CD series, Volumes 1-5.