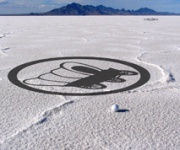 GPS- and audio-guided walking tour on the Bonneville Salt Flats

This environmental arts project engages communities in a GPS/audio-guided walking tour on the Bonneville Salt Flats near Wendover, UT. The tour follows “interest markers” sprayed on the salt surface with black environmentally safe dye. The markers consist of rimmed circles, 15-20 feet in diameter, each bearing a different symbol in its center. Over an area of 1.0 x 0.5 miles they will outline a miniature version of ancient Lake Bonneville, an inland sea that once covered most of UT and reached into NV and ID. The Great Salt Lake and Bonneville Salt Flats are its remnants.
Guided by a GPS device, which serves as compass and audio-player, hikers will be guided from marker to marker. At each marker they can listen to narrative about the natural history of the salt desert, human interaction with this environment throughout history, and contemporary use of the salt flats. (E.g. at the marker with a mammoth, they will learn about ancient animal life; the marker with the tank discusses military use of the Salt Flats; the marker with the covered wagon addresses the fate of the Donner-Reed party, who crossed the salt flats in fall 1846, erroneously led to believe that this route would get them to CA faster). The narrative will also comment on the participant’s position in relation to the actual geography of the lake. For example: You have walked 0.3 miles from the last interest point. Put in scale to the ancient lake’s actual size this would be a distance of 50 miles. On a contemporary map you are now at the Southern tip of Sevier Lake, a small remnant of giant Lake Bonneville.
The walking tour starts and ends at the Salt Flats viewing area East of Wendover, off I-80. The walk will take approx. 2 hours, including frequent stops to listen to narrative and appreciate the Salt Desert.
The land is owned by Intrepid Potash of Wendover, who have indicated their consent that I realize my project on their land. The project is also supported by the Center for Land Use Interpretat