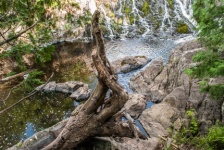 Grassroots Battle by the Gichigami (2014)

Some of the most significant wetland ecosystems in the Great Lakes Basin lie in Northern Wisconsin. The Kakagon-Bad River Sloughs,“the Everglades of the North,” includes 16,000 acres of marsh and wild rice. Just to the south sit the Penokee Hills, a 25-mile range that harbors hardwood forests, 100 miles of Wisconsin’s finest trout streams, pristine lakes, canyons and waterfalls, and an astounding array of wetlands.
Here on this escarpment by Lake Superior, a Florida company with a troubling reputation plans to dig what may be the world’s largest open-pit taconite mine. The project would cost $1.5 billion but Wisconsin tribal leaders, fishers, environmental activists and others warn that the cost to local habitat, culture and economy could be devastating.
The Ojibwe migrated here over 1,500 years ago, seeking the place where “food grows on water.” They found it, one of the largest beds of manoomin (wild rice) in the world, and here they settled. “Wild rice is the center of our universe,” a tribal leader explained. Others equate the mining project with genocide.
Grassroots Battle by the Gichigami,a documentary project by freelance journalist Tom Boswell will include a traveling exhibit and articles and photos in local, regional and national media. Boswell has interviewed dozens of people concerning the mining project:tribal elders, elected officials, scientists, local residents and environmental leaders. He has explored the sloughs and Penokees and photographed people and places. The project is designed to document the issue and inform the general public about potential environmental, economic and cultural threats of the proposed iron-ore mine.
The Bad River Band of Lake Superior Chippewa’s reservation lies between the Penokee Hills and the sloughs where they harvest rice. The Bad River itself flows north from its source in the hills through the reservation, then snakes through the sloughs before emptying into Lake Superior, the largest freshwater body in the worl