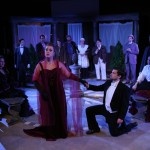 The six participants had the opportunity to coach with the mainstage conductor (Lidiya Yankovskaia of Juventas Ensemble) and directors (Patrick Hansen of McGill and Kirk Jackson of Bennington College). This past summer they participated in Suzuki movement classes sponsored by Aliana de la Guardia of Boston-based Guerilla Opera, (sometimes this is replaced with monologue preparation workshops). The students sang for and received feedback from Stephens Artist Management and were treated to an intimate lecture and Q and A on preparation practices of a young artist by Marc Scorca, the president of Opera America.

In addition to chorus and outreach performances, the students sang comprimario roles and cover roles in the productions, this past year Gianni Schicchi and Marriage of Figaro. Both productions were fully staged and costumed, sung in Italian with a 20+ piece orchestra. There were a total of twelve performances.

Students are housed in the community and transportation to Cambridge, NY from Albany or Saratoga Springs is included in the price of tuition.

Thanks to the Puffin Foundation and other supporters, the program tuition was reduced from $2,000 per student to $168 per student on average.