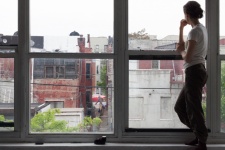 A Spring 2013 micro-residency at BAAD!/Bronx Academy of Arts and Dance (841 Barretto St) with dancer/ choreographers Alicia Diaz and Matthew Thornton, Marion Ramirez and Jung Woong Kim, and multi-media artist Hatuey Ramos Fermin led to an informal showing: May 19, 2013. During the residency, the artists rehearsed at BAAD!’s theater space and, as part of their research, met with local art and community leaders: Petrushka Bazin Larsen (The Laundromat Project), Kellie Terry-Sepulveda (The Point C.D.C.), Majora Carter (Majora Carter Group/MacArthur Fellow), Charles Rice-Gonzalez (author and co-founder of BAAD!/Bronx Academy of Arts and Dance). Arthur Aviles, choreographer and co-founder of BAAD!, generously gave the artists a personal tour of his neighborhood in Hunts Point. The artists used research material gathered from the residents/cultural workers in this micro-residency project to create an informal performance work grounded in the surroundings and stories of Hunts Point. The showing took place in BAAD!’s theater space and outside – along Barretto and Manida Streets. Audiences were located outside and then inside to see the work shown in both theater and outdoor locations. Audience included urban planners, other artists and scholars, local residents who contributed to the Q&A. The project brought others outside of the art field into Hunts Point to create a place of exchange about urban space, entrepreneurship and gentrification, and personal story. This community project aimed to help celebrate and highlight current and future needs and histories in the area through its residents and cultural workers. This residency was meant to be a first step towards cultivating a series of small-scale, site-specific community-based performing arts projects in the area. photo credit: (c) Groana Melendez, 2013