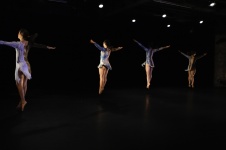 “I-5, Windmills” was premiere in October 2011 at ARC, Pasadena and was choreographed to the first movement of Sasha Matson’s score I-5. The” I-5,” Interstate 5 is a major North and South Interstate Highway on the West Coast of the United States. The score is in five sections each relating to a different experience of the drive between San Francisco and Los Angeles which, was composed during a time when Mr. Matson commuted weekly between those two cities. This majestic score for string quartet and harp speaks so clearly of the California landscape in general and the various changes in the landscape and experience of the drive in specific. It is more than just music it is evocative of the smells, the feeling of the places and the transportation of the drive. This composition captures the essence of California, an environment we must preserve with its flaws and sweeping beauty. I will be capturing the mood and ideas surrounding each section of the composition and expressing them through movement.

I-5, Windmills examines the issue of power, the wind, air pollution, rolling ridge green or tan mountains and of course the majestic turbines that grace their slopes.