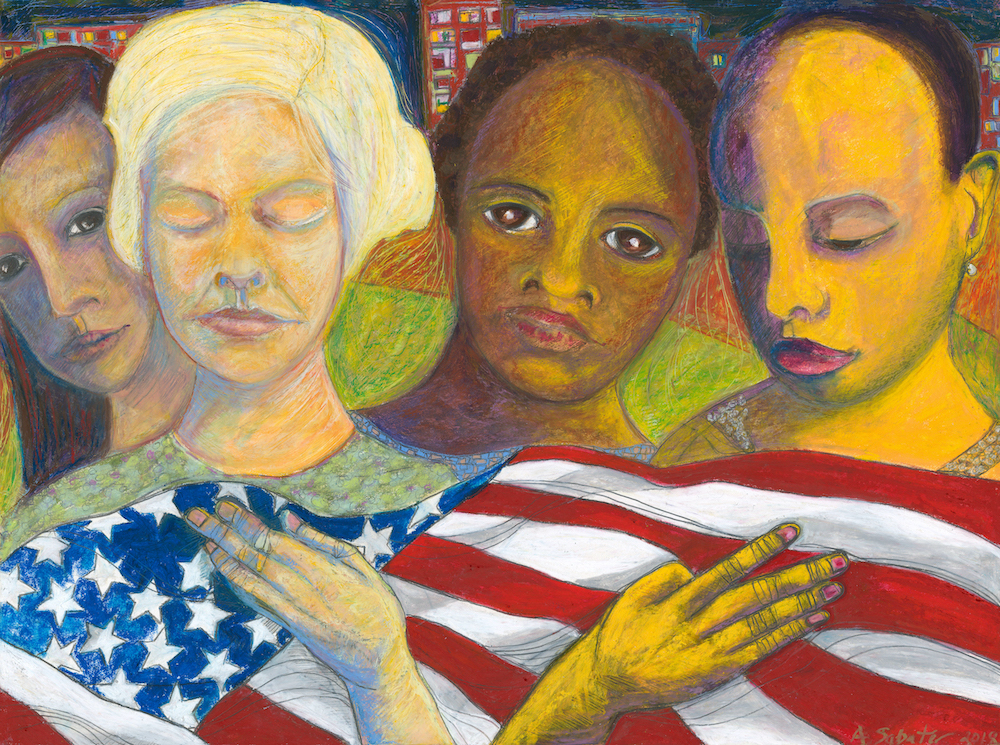 We all share a common beginning. Birth. Then, our lives are formed by experiences, words, and images all of which form our thoughts of who we are and how we interpret our surroundings. Together we form a nation of diversity and a common humanity.

In my family, my devoted parents raised me in a suburban white neighborhood. On my father’s side, I am a descendant of grandparents from Spain who immigrated in the early 20th century; my mother’s side were Northern European English Irish ancestors who immigrated much earlier. My father was a patriotic man. He was a war veteran who carried emotional battle wounds throughout his life. He believed in the importance of sacrifice for one’s country. “Best Country in the world”my father would state. It was with this passion he proudly flew the American flag from our front porch on holidays. To me, the flag represented respect, unity, and justice for all people.

The day after September 11, 2001, I flew the flag from my porch. I was not alone. For me it represented unity then and a collective grief we all shared. It was a time of reflection and to seek and understand answers to “why.”

Many years have passed since September 11. We as a country have tossed and turned while seeking purpose, justice, and identity. Subsequently, the concept of unity has been lost and current rhetoric is propagating division at many levels. The flag now appears to represent various concepts of patriotism including protection of one’s beliefs at the expense of others, on one hand, or, protection of all diversity with respect and dignity on the other. When I see a flag flown now, I wonder: What side are you on? I don’t consciously choose to think this. I have not flown the flag as I have in the past. I will for Memorial Day and Veteran’s Day as a tribute to both my parents and all who served in the military.

I am a sixty-year-old white woman. I have not experienced the hardships many have in our country. I understand that I am just one more person riding the stormy sea of our political climate. We all use our unique tools to bring peace to our minds and patience to the times. We draw from images, words, experiences that form us into who we are at this moment. I look to my collection of stories, observations, and thoughts and strive to create a visual experience which is meant to express not just my concern of division between people, but a shared desire for unity and respect for all.