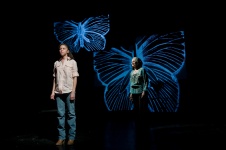 “In the Time of the Butterflies” Study Guide

In February 2011, Spanish Theatre Repertory Company, Ltd. (aka Repertorio Español) brought to the stage the world-premiere adaptation of Julia Álvarez’ best-selling novel, “In the Time of the Butterflies”, written by Caridad Svich. Based on historical events during the grueling dictatorship of Rafael Leónidas Trujillo Molina, this poignant drama tells the story of Dedé, Patria, Minerva and María Teresa Mirabal, and their struggle for justice against the Trujillo regime. Sadly, Patria, Minerva and María Teresa were brutally killed by the government for their resistance. Today, the ‘butterflies’ as they became known for their code name during their plight, remain symbols of political resistance and icons against violence directed at women. In 1999, the United Nations General Assembly designated November 25 (the anniversary of the murder of the Mirabal sisters) as the annual date for the International Day for the Elimination of Violence against Women in their honor.
In the Time of the Butterflies has become part of the classroom work for many local schools.
As part of our goal in sharing and making the story of the Mirabal known among new generations enjoying the production and thanks to the Puffin Foundation, we developed an online study guide to complement the production. Making this the 13th guide to join our permanent online resources for students, the “In the Time of the Butterflies” study guide serves as ancillary materials for the production. As with all our study guides, it is available free of charge at Repertorio’s Website (www.repertorio.org/education). It includes breakdowns of plot, character and setting as well as information about the author, playwright, and the historical context of the story. Additionally, it explains artistic variances in the medium of the play as it differs from the novel. Repertorio drew upon experts in the field and past contributors responsible for our study guide series to write the guide for “In the Time of the Butterflies.”