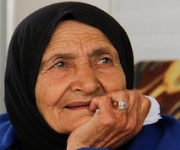 Inside the Walls, Three Judges

Award-winning documentarian Erika Cohn spent six months living and working in Israel and the Palestinian Territories in the West Bank, where she sought out stories from traditionally silenced populations and documented intimate moments within their daily lives. The purpose of the exhibit “Inside the Walls” and the film “Three Judges” is to provide an opportunity to reframe our notions of the “other,” (whether that be Israelis, Palestinians, Muslims, Arabs, Jews, Women, or Men) and to humanize a part of the world that Americans in general know very little about. Both the film and the exhibit aim to increase global understanding of Shari’a law and Islam, promote cross-cultural dialogue (especially US/Middle East relations), provide a lens in which to view the Middle East’s changing socio-political landscape and encourage women to take leadership roles within their communities, worldwide.
While the majority of the world wrestles with the balance between religion and politics, the Middle East currently appears to have a pronounced imbalance. In a time of political unrest, amid the Arab uprisings, women’s voices are often the last to be heard. The documentary film, “Three Judges,” addresses these disparities. In 2009, three Palestinian women, changed history by becoming the Middle East’s first female judges to be appointed in the religious courts. With unprecedented access, “Three Judges” chronicles their journeys through the West Bank’s Shari’a courts and the profound ripple affect their appointments made throughout the Islamic world.

When we as Americans are exposed to Islam as terrorism, women as victims of war, and Israelis and Palestinians as enemies, it takes a conscious effort to reframe our perspectives. This project deconstructs our notion of the “other” as a one-dimension being by presenting individuals and lifestyles, rather than political perspectives and ethnic identities; multi-dimensional people with diverse identities that can transcend conflict.