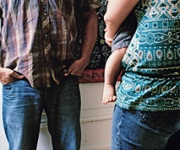 “Intermarried” is a photography-based project which explores the notion, and questions the implications, of intermarriage. The idea for the project sprouted from a short-lived campaign of the State of Israel that targeted Jews who were ‘lost’ to intermarriage. While uncommonly explicit in its message, the underlying sentiment behind this campaign is not uncommon. Being myself part of a ‘mixed couple’, this made me think of the many challenges faced by couples who choose to share their lives regardless of their different origins, ethnicities, races or religions.

I initiated the project in 2009 by contacting an online parent group in Washington Heights, my NY neighborhood, inviting couples who define themselves as ‘mixed couples’ to participate. Drawing on the experience of the people who responded to my post, I have developed a narrative that deals with the multifaceted issues posed by intermarriage.

“Intermarried” does not attempt to represent all kinds of intermarriages or illustrate what ‘mixed couples’ look like. Rather, through images and text (including excerpts from a questionnaire I asked my subjects to fill out), the project reflects on the subjective experience of people who choose to live with someone who is not from their immediate social group. Moreover, the project juxtaposes interfaith and interracial marriages in order to make viewers re-think their own preconception. And this is maybe the main idea behind “Intermarried” – to create a platform for thinking and talking about issues that are very personal but have vast social and political implications.

The images were captured with medium and large format film cameras, and printed as C-prints. The project was published by Kehrer in 2013.