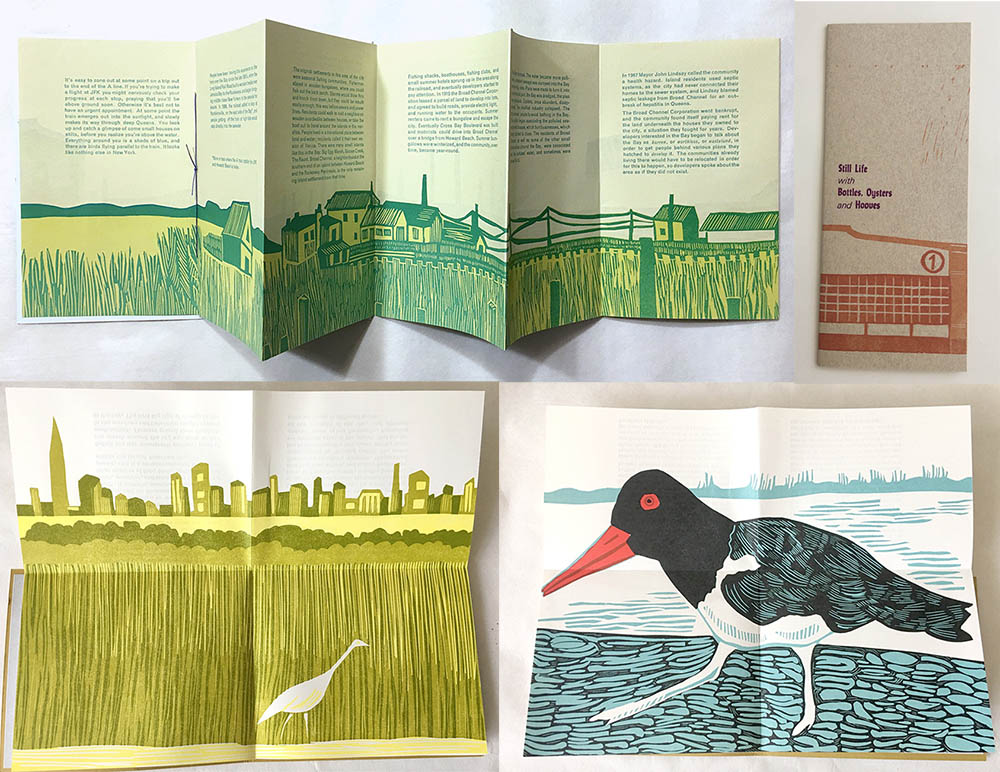 I publish editions of informational pamphlets, often on the history and ecology of New York, as well as broader topics of climate change and urbanization. Begun in 2010, these small-scale publications combine text and image produced in editions of 150-250 copies. These works are then distributed to a chosen audience via the postal system. I identify primarily as a printmaker, but I also organize events including walking tours and workshops in conjunction with my pamphlets. Distribution in central to my publishing projects; these publications are intended to be read, distributed and handled widely. I use the series as a way of making letterpress work relevant and accessible in a world that emphasizes the sharing of intangibles among tenuous virtual networks.

Each pamphlet is a hand made publication distributed in an edition of 200, which use the obsolete technology of relief printing and letterpress, reflecting in their form the history of publishing and mass communication. Letterpress is the printing technology of moveable metal type invented by Johannes Gutenberg in 1439. Pamphlets were the earliest form of journalism, the precursors to the printed newspaper.

My funded project included three pamphlets on the history, ecology, and communities of Jamaica Bay, and two public events. The first pamphlet focused on the history of Floyd Bennett Field and Dead Horse Bay in Brooklyn, the second on the Jamaica Bay Wildlife Refuge, and the third on the community of Broad Channel, the only inhabited island in Jamaica Bay, and one of the most vulnerable areas in New York City to rising sea levels.. On May 21st, 2017 I led a walking tour of Floyd Bennett Field and Dead Horse Bay, in conjunction with the first pamphlet of the year. On October 14th, 2017 I gave an artist talk about the entire project at Shoestring Press , my process of printing and publishing, and distributed pamphlets to everyone in attendance.

I am interested in documenting local history and culture: how the land around Jamaica Bay has been literally created by city planners, changed by residents, and reclaimed by wildlife. These overlapping communities and histories reflect the shifting boundaries of the city, and the shifting shoreline that the city needs to grapple with in the future. I am interested in how infrastructure is made in cities, how nature adapts to urban landscapes, and how we will adapt to our future.