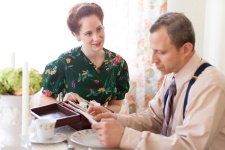 A DIFFERENT KIND OF WAR FILM: What makes K.I.A. innovative is its approach to the war film. Traditionally, women are rarely a part of the conversation in movies about war, and K.I.A. juxtaposes the story of a woman at home against a troubled soldier coping with undiagnosed PTSD. Each story has validity, yet both of these perspectives are often overlooked in favor of a glorification of war, particularly when it comes to depictions of World War II.

HISTORICAL BACKGROUND: Rick’s story is loosely inspired by the Dachau Massacre, which occurred on April 29th, 1945. Upon the liberation of the Dachau concentration camp, American soldiers executed the remaining surrendered German guards. These soldiers saw unimaginable horrors and were forever changed. PTSD was an unrecognized condition during World War II, and did not become formally acknowledged by the American Psychiatric Association until 1980. The term “shell shocked” was used during World War I, but the condition was largely misunderstood and stigmatized.