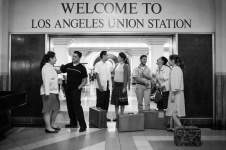 Legacy of Exiled NDNZ examines American Indians living in urban America, in this case, Los Angeles, California. This multimedia project focuses on young adults (from various tribes: Navajo, Cherokee, Seminole, Barona Bands of Mission Indians and Lakota) who have migrated from their reservations in the course of their own lives or are the offsprings of families that relocated from various tribal reservations through the Bureau of Indian Affairs’ (BIA) relocation program from the 1950s through the 1960s. This photography/film project showcases young adults of today paying “tribute” to the first generation of Relocated (exiled) Indians.

Our vision of this project is to showcase an indigenous neorealist aesthetics that arises from the stories of Indigenous people and their understanding of how Indian Relocation’s history is part of California’s history, and to also change the negative and inaccurate views of who we are as American Indians in modern times. The efforts of this project is to help foster a better understand of the differences, despite the culture ties, that we as American Indian people have and offer an accurate portrayal of how Indian life and tribal identity are still sustained, even in an urban city like Los Angeles. California.

A Navajo Multimedia Documentarian, born and raised on the Navajo Reservation of the Tachii’nii Cla(Red Running into the Water clan) Pamela documents and develops photographic narratives that illustrate the real stories of American Indians within the environments and communities that they live in. She captures the emotions, the beauty, and the modern reality of American Indians.