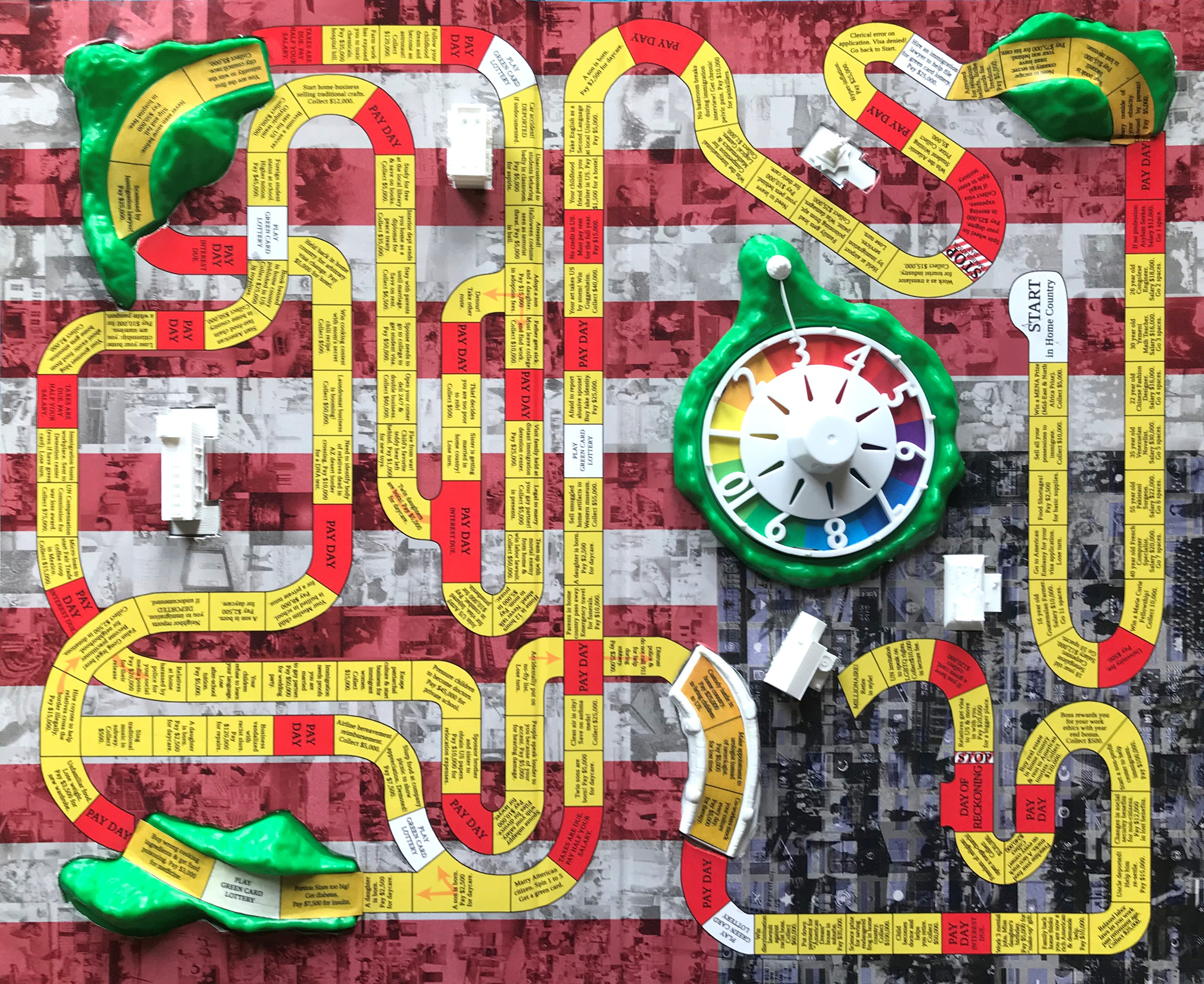 “Life: Immigration Game” is a custom-made artwork based on Milton Bradley’s “The Game of Life”, which is a family table top board game, taking players through rewards and penalties similar to what a typical suburban American might encounter during his or her life. “The Game of Life” culminates in retirement, preferably as a millionaire. The artwork for the game board is bright and pastoral.

“Life: Immigration Game” replaces all the game tiles and the artwork of the game board so players experience life as an immigrant to the United States. Here the number of rewards and penalties are reversed, so the player is more likely to be penalized, though it is also possible to become a millionaire in this version of the game. One may have to pay $10,000 for emergency travel for a parent’s funeral, and one may earn $240,000 for franchising taco trucks (“A taco truck on every corner!”). Employment and diplomas can change during the immigration process: the US may not recognize one’s medical degree, for example, so a player who was a Pakistani Surgeon now becomes a Nurse’s Aide for half their salary. Players can lose their visa and immigrate as undocumented workers, risking deportation. Winning the green card lottery is possible for everyone.

All the game tiles are based on true stories. Some are based on my own experience of coming to America: missing weddings, births and funerals because it is too expensive to travel; misunderstanding jokes and cultural references; having to put up with daily micro-aggressions such as my co-workers and in-laws making stereotypical jokes about my country’s food, language, and political past; having parents and family members disapprove of my choice of friends, mates, professions, as I was becoming “Americanized”. Some are based on interviews and talks with family, friends, and strangers who have immigrated by a variety of means and for a variety of reasons. Some are based on books and personal accounts. I want to show facets of being an immigrant that are not necessarily obvious, as well as some of the known and well documented hardships that are inherent to being a foreigner.

When fabrication is complete, I place “Life: Immigration Game” into an original and unaltered “The Game of Life” box. I then place the game on the shelf of game cafés, to be discovered accidentally by patrons: I want to reach people who are not necessarily sympathetic or familiar with immigration, and see if the game can change some of their preconceptions.

I am currently working on making the project into interactive game performances.