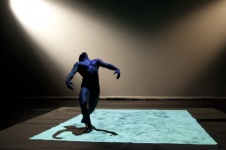 The light from a single projector, suspended above, reveals a nude black painted figure installed atop a large 6×9 canvas of white craft paper. The white light of the projector, which is triggered by the movement of the figure, slowly fades once the figure returns to stillness. The presence of the figure, revealed by the triggered projector’s light, is a visual stimulus by which the imagination of the viewer is charged through the function of visibility and invisibility.

As the performer’s movement intensifies, sweat liquifies the powdered tempera paint, and with each movement, creates gestural impressions on the paper. By the completion of the work, the plane is transformed into a marked surface by the action of the performer.

Accompanying the visual component is an original, meditative audio score, also triggered by movement. A base score plays continuously, and an additional layer of sound is added when the figure is in motion.

The work is kindred with the action painting of the 20th century abstract expressionists (Franz Kline in particular), however, only as a point of departure. The foremost intention involves the audiences’ active and cognitive participation.