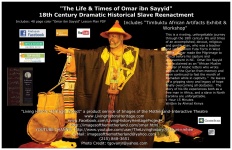 During the 18th Century, two human beings from West Africa, all of them members of the third largest ethnic group across eleven African States, would become innocent victims of the world’s worst holocaust……The Trans Atlantic Slave Trade. This holocaust would claim over 12 million lives over a 3-400 year period. Muhammad Ali ibn Sayyid, a 12 year old Fula child from Kanem-Bornu, was kidnapped and sold east-bound into the Arab World and Europe. Omar ibn Sayyid, a 37 year old Fula scholar and Hajji from Futa Torro was kidnapped and sold west-bound into Charleston, South Carolina.
Both of these people would write documents about their life stories, both in Africa, prior to their enslavement, and in America.
Muhammad Ali ibn Sayyid, son of a famous Kanem-Bornu Calvary General, was captured by Tuareg slavers, with almost 40 other boys and marched across the Sahara Desert where he was sold to the Turks. His Turkish masters treated him kindly and even took him on the Pilgrimage to Mecca. Due to financial tragedy, Muhammad was sold to European aristocracy, he learned 12 languages, saved money and became a “free man” in Russia. Muhammad caught a boat to the Americas, hired as a valet servant, and was the victim of a confidence scam that left him stranded and abandoned in Toronto, Canada.
An African-American Reverend gave Muhammad ten dollars, advising him to catch the ferry to either Buffalo New York or Detroit Michigan, where he would find “colored people” who would hire him. Muhammad went to Detroit and became a French language teacher, teaching African-American men, women and children the French language as part of the Underground Railroad on their journey to “freedom” in Toronto, Canada. In 1863, President Abraham Lincoln would sign and issue the Emancipation Proclamation, and also establish the United States Colored Troops, allowing African-American men to join the Union Army during the Civil War. Muhammad left his chalk and eraser behind, joined the 55th Massachusett