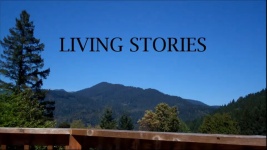 Storytelling is central to virtually every civilization, and those indigenous to the Pacific Northwest are no exception. But several hundred years of disruption to our traditional lifestyles have also wrought changes upon our stories and how we tell them. Living Stories consists of five interviews with Native professionals living in Oregon and Northwest California who use stories, traditional and modern. Julian Lang and Phil Albers, Jr. are both Karuk language teachers in northern California. Both are also active in revitalizing other elements of Karuk culture, including storytelling. Neva Lenk is a Native student support specialist in Portland who uses theatrical adaptations of traditional myths to help her students connect with and develop pride in their heritage. The late Robert Greygrass was a theater artist and life coach who used stories to entertain and help people to heal. Ed Edmo is a Shoshone-Bannock elder and storyteller who not only tells traditional stories, but also develops solo shows that he’s performed everywhere from Oregon to India. Living Stories is an exploration of the ongoing dialog of how we as indigenous people can adapt to a radically changed world while still holding true to our identities as Native people.