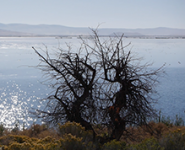 Refusing to continue living under squalid conditions on a remote reservation in Oregon, several hundred Modoc people, led by Kintpuash, also know as Captain Jack, returned home from forced exile in 1870. This move aggravated European-American colonists who had moved into the Modoc homeland, resulting in armed conflict between 52 Modoc soldiers and the U.S. Army. At the beginning of hostilities, the Modocs retreated to the safety of an otherworldly lava fortress. The Modoc held off a well-equipped army of Civil War veterans for seven months, embarrassing the Army in what was an international media sensation—though the war is now largely forgotten. Eventually succumbing to dehydration, low morale, and political infighting, Modoc leaders struggled to preserve unity among their ad hoc confederation.

The agrarian landscape of contemporary Modoc country is a physical byproduct of the region’s conquest. This landscape is inhabited by markers of primordial, ancient, colonial, and modern history. Hidden within its wildlife refuges, ancient obsidian mines, abandoned trains, war memorials, and even a former Nazi POW camp, is a more complete history, which tells of more than just battles and assassinations. This cinematic essay, narrated by Stephanie Foo (from This American Life), meditates on the landscapes that tell, reinvent, and obscure the history of the Modoc War. This is as much a film about the displacement of Modocs from their homeland as it is a story about memorialization, remembering, and forgetting. The film features an original score by Joseph Genden (of Maus Haus). “Modoc” is fiscally sponsored by the San Francisco Film Film Society.