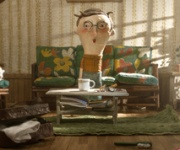 “Negative Space” is a short, animated film that tells a story about a father-and-son relationship through the act of packing a suitcase. Based on a 150 word short story by Ron Koertge, our adaptation will be realized as a 4-min film using stop-motion puppets and object animation. The narration for the story will be based on Koertge’s original text and the cinematic visuals will add detail and subtext to the narrative.

Always leaving on business trips, the father in “Negative Space” connects with his son Sam by sharing his secret art of packing a perfect suitcase. There is a pragmatic method to his system: Each piece of clothing folds in a specific way, forms fit together like puzzle pieces, and every centimeter of space is considered. This intimate ritual is passed down from father to son as a right of passage ritual and an act of affection.

“Some guys bond with their dads shooting hoops or talking about Chevrolets. We did it over luggage,” Sam explains.

When reading Ron Koerge’s short story, I connected with the characters on a deeply, personal level. As an airline pilot, my father traveled often when I was growing up. I don’t remember our trips to the zoo or theme parks, but the image of the crisp, white shirt in plastic that he packed in his suitcase is burned in my memory. I remember my dad adjusting his watch precisely before leaving the house and I remember the packing list that he pinned to the wall of his study. My most vivid childhood memories are connected with objects, textures and precious banal routines.

“Negative Space” will portray the small things that make up such a large part of our lives.