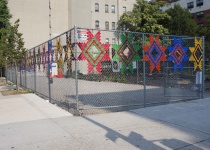 North Star, a fence weaving installation at 2171 Fredrick Douglas Boulevard and 117th Street in Harlem, New York, celebrates the legacy of Fredrick Douglass’ first newspaper which was known to be the most influential black antislavery papers published during the antebellum era. The paper was used to denounce slavery, fight for the emancipation of women and oppressed groups. Its motto was “Right is of no Sex – Truth is of no Color – God is the Father of us all and we are all brethren.
North Star was created by partnering with SOHA Square (a non-profit that utilizes the lot as a neighborhood flea and farmers market) to host and install the piece with neighborhood volunteers including the 119th street P.A.L Youth Group. While many vacant lots around New York City have been transformed into gardens, many still remain empty caged lots. By weaving a piece of art into this fencing, these neighbors created an engaging and beautiful urban tapestry that connects their community to the history of the Boulevard’s name sake and transforms the caged lot into visual oasis.