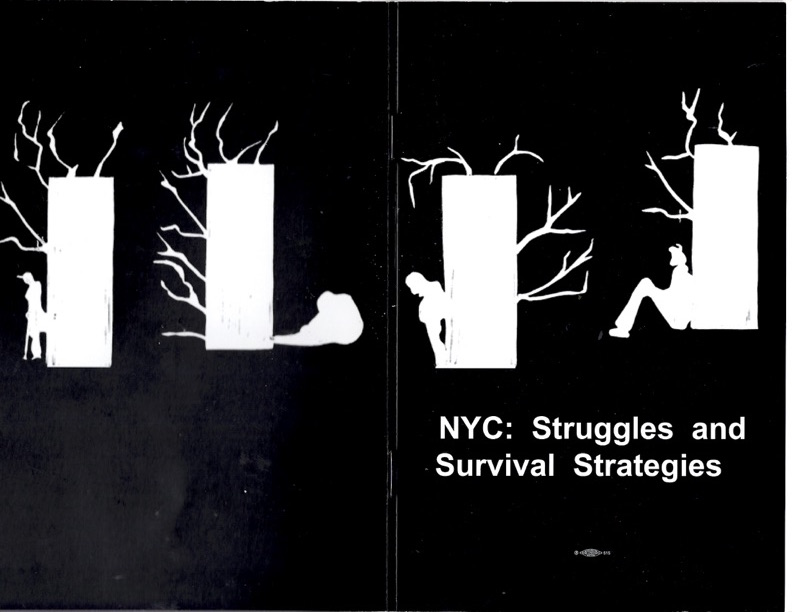 This booklet is to introduce New Yorkers to each other.  My political hope is that if we see each other as compatriots in the struggle, we will join in addressing the real powers that keep us all down.

The Puffin Foundation says that it is interested in art that will “advance social change.”  Oh, me too, with an ache!  And it places emphasis on “encouraging public participation” in such art.

The goal of my Project, working title, NYC: Struggles and Survival Strategies, is to introduce New Yorkers to each other.  I want to make the point that a large variety of us have financial problems – not just the very visible panhandlers, but the people paying for their groceries with food stamps, and the middle class families who sacrifice quality food, for example, to cover high rent.  My political hope is that if these people see each other as compatriots in the struggle, they will stop scapegoating each other (as per the horrible argument on the subway the other day between a “I did it all myself,” and a panhandler) and join in addressing the real powers that are keeping them all down. The root cause, whether it results in low wages, no housing, or food insecurity, is that our our governing body makes laws that hurt us, because legislators are beholden to the rich powers that be to get them elected.

The antidote is to engage people in the political process, as study after study has shown that the majority of citizens WANT good food, affordable housing, single payer health insurance, but lack political power.  This is not necessarily about voting but about all methods of being a counterweight to the rich powers that be.  My task is to move the populace into engagement.

The design of my booklet lends itself to that.  First, the colored, eye-catching prints, many full page size, bleeding to the edge of the paper, will catch the eyes of my proposed audience.  Then, the sparse narrative, encouraging actual reading.  And it is personal, i.e., me doing the talking.  Again, appealing to read. The subject is the experiences of financially-struggling New Yorkers.  Giving out free booklets is thus appropriate.  And the experiences of a very diversified sampling of strugglers make sense, varied enough that many people reading the book find one they identify with.

I’m then left with the question of audience.  I want a large and varied audience. I envisaged my goal succeeding by convening groups of people to read some of the narrative aloud while viewing the book’s artwork, and my asking questions.  I didn’t quite get to my goal of doing this with strangers, but rather with groups  of 6 or 7 friends at a time.  It was striking; the groups debated, my friends criticized and praised the characters in the book. They disagreed with each others assessments.  Discussion got heated.  That’s exactly what I envisioned!