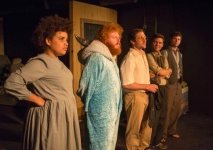 Orville and Wilbur Did It! by David Zellnik (2014)

This hilarious new play by Drama Desk nominee David Zellnik began its development in 2013 with the acclaimed ensemble of The New Colony, winner of the 2011 Emerging Theatre Award from Broadway in Chicago. Using The New Colony’s unique process for creating new theatre, Orville and Wilbur Did It! began with nothing more than Mr. Zellnik’s brief outline. From there, director Andrew Hobgood cast the show using seven actors to fully explore the characters in a workshop setting. Mr. Zellnik observed the characters take shape in this workshop and wrote his play tailoring each role to the actor who workshopped the character. One year later, the show opened in Chicago with all seven original actors from the workshop playing those characters in the world premiere production with The New Colony. The show also featured three original songs by Zellnik and Eric Svejcar.

“Orville and Wilbur Did It!” may well be the most completely off-the-wall production I’ve seen in the past five years. The New Colony world premiere about a touring children’s theater company is a fast-paced frolic that lands squarely in whacklandia — and that’s a terrific place to spend the show’s 100-minute running time… Set primarily in anonymous hotels, school auditoriums and a cramped van that ferries the cast across the country like an NC-17 rated version of the Partridge Family, “Orville and Wilbur Did It” is ridiculously rich with off-the-wall, utterly believable dialogue. Peppered by composer Eric Svejcar’s Zoom-worthy numbers, [the show] explores the manic teeter-totter ride that is a career in the arts – or really, a career in anything – CHICAGO SUN TIMES 6/23/14