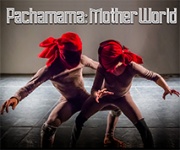 Pachamama: Mother World is a new exploration of Dance Theatre as well as an anthropologic study into the male initiation rituals of the Selk’ nam (Onas), a subgroup of the Tehuelches tribe that inhabits the southern tip of Tierra del Fuego, Argentina.
Traditionally, the Selk ‘nam train “actors” who participate in tribal rituals -one example of how performance and ritual become blurred.
The male initiation rituals of the Selk’ nam are celebrated annually, lasting anywhere from three months to almost the entire year. These rituals have three main functions: initiating the men; passing on the heritage and cultural legacy of the tribe through sharing songs, spiritualism and religious knowledge; and entertaining the women.
The performance unfolds like a prehistoric commedia dell arte. Thirteen characters participate in ten specific rites within the larger ritual of initiation. The rituals, as well as the performance, make use of masks that give the characters superhuman power.
In a move away from the purely spectacular and presentational side of dance, my work takes the opportunity to reconnect with the primal impulses of art, creation, communication, identity and celebration.