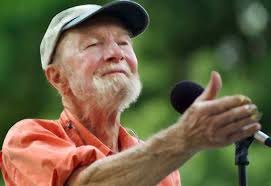 Pete Seeger’s Legacy: IF I HAD A HAMMER

Pete Seeger’s Legacy is a program that looks back at Pete Seeger’s life and times. Unlike previous Seeger films, this program not only assesses Seeger’s political and social efforts but shows the effect of those efforts on a wide range of people and, most importantly, upon the rivers and waters of the world. Among its singular aspects is a sizable segment on Seeger’s communism, and how it fit into America of the late 30’s and early 40s. Seeger’s son has written that no one, to his knowledge, has ever explored this subject satisfactorily on television or film until now, and that Pete never explored it within his own family.

The film uses over 20 of Pete Seeger’s songs and performances to underlie the story of his activism and the environment-saving work of the sloop Clearwater. The music ranges from the earliest banjo hoe-downs to Seeger’s political songs. There is rare video and film footage from performances in Australia and Sweden in the 1960’s (when he was still black-listed in the U.S.) to illustrate his enormous scope.

This program shows us what he has left behind that we can build on for continued environmental protection and to enhance our democracy. A dozen interviewees – from young and old performers to historians and those who knew him well – give modulation and depth to the program.