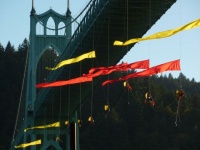 SACRIFICE ZONES is a one-hour radio documentary that investigates the push to transform the Pacific NW, a region that prides itself on its environmental leadership and scenic landscapes, into a global center for shipping fossil fuels. The program examines a rash of proposals to export vast amounts of fossil fuels to Asian markets via Oregon, Washington, and British Columbia, including siting the largest oil terminal in North America in Vancouver, Washington. It shows how petrochemical development of the scale being proposed for the Pacific Northwest threatens the core cultural, social and environmental values that define the region. The documentary tracks opposition to these proposals from Native American tribes, longshoremen, environmentalists, business leaders, health care professionals, first responders and residents along the corridors traversed by trains carrying coal, Bakken crude oil and Alberta tar sands oil to these prospective facilities.

SACRIFICE ZONES weaves together examples of multiple fights to prevent the Northwest from becoming a sacrifice zone for the fossil fuel industry. These accounts will help people recognize patterns of potential fossil fuel development that could emerge in their own communities. They provide ready-made stories to inspire organizing when the next inevitable project pops up. By exploring the mindset and motivations of businesses and institutions that are promoting this development and the rationalizations they offer to affected communities (these projects create jobs, they break our dependence on foreign oil, etc.) the program prepares potential activists for the dynamics of struggles to come.