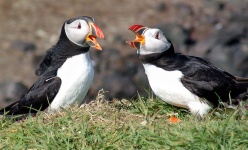 West African countries plagued by civil unrest often wage war on women in the form of rape. GRACE is one such victim, birthing a daughter, HAWA, as a consequence of this rape. Having been separated from her child for 8 years, Grace finally joins young Hawa in the U.S., ushering in a new life with her estranged daughter’s surrogate family. Seen through the eyes of 8 year old Hawa, Grace’s already unraveling mental state surfaces in violent and self destructive behavior as she struggles to adapt to American life.