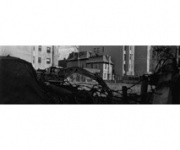 Community gardens present an amalgam of the diverse interests and histories of their gardeners. Unlike the buildings and storefronts, owned and constructed by others, which make up the typical fabric of the inner city, the gardens are planned and constructed by their members. Idiosyncratic in their materials and design, the gardens offer a rare place of respite and legal public expression in the city and offer a stark contrast to the fenced off lots and vacant areas that were their origin.

The community gardening movement in New York City took root in the late 1970s when the city and many private owners made the decision to abandon large amounts of land that they had no interest in or could not afford to maintain. Faced with neglected plots—often sites of drug use, dumping, or worse—locals took over these areas and cultivated them.

With Columbia University’s expansion program and many new real estate development projects in the area, the face of Harlem is rapidly changing and many of the gardens and open spaces are disappearing, being hemmed in, fenced off, or built over. For the past four years I have been mapping and photographing these sites throughout Harlem, approximately 150 locations, looking at their growth and life as well as the construction that in some cases engulfs them.

These photographs are made with a custom built panoramic camera capturing a wide landscape format. Applying a format originally developed to capture the grand view to the narrow confines of these urban spaces is a unique and challenging way to represent the complex urban environment and its psychological, social, and physical compromises and conflicts.