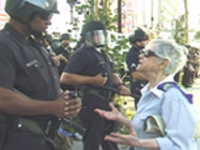 The Land of Orange Groves & Jails

In “The Land of Orange Groves & Jails” the filmmaker’s great-aunt Yetta finally tells her tale of teenage activism during the free speech and labor battles of 1920s Los Angeles. In the country’s premiere anti-union city Yetta and her friends were teenage labor activists. Her arrest for flying a red flag over a summer camp in 1929 resulted in a ten year prison sentence under the sedition act of the day. The appeal resulted in the US Supreme Court’s first affirmation for free speech rights – Stromberg v California – laying important groundwork for our right to protest and dissent.

This is a “David and Goliath” story of young people from immigrant families who stood up for their beliefs, inadvertently tested the limits of Constitutional protection, and helped guarantee one of America’s most treasured freedoms. But past mixes with present as the filmmaking unfolds: as the filmmaker learns more about her family’s radical history she has to confront a multi-generational legacy of secrecy and fear. In the beginning reluctant Aunt Yetta thinks what’s going on now politically is so much more important than the past – but by the end of the film Yetta sees how her story set a powerful precedent for current struggles – and over 200 civil rights cases over the last eighty years. The title is taken from a story Upton Sinclair wrote about Yetta’s trial.