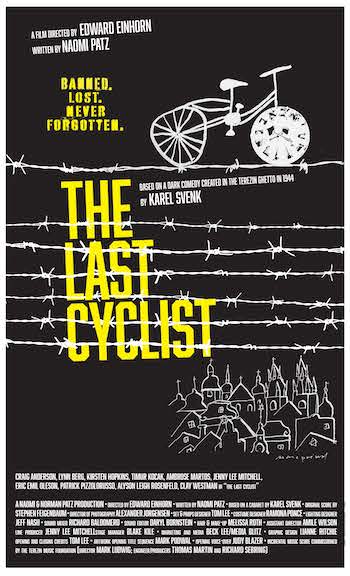 “THE LAST CYCLIST,” THE REIMAGINING OF A CABARET WRITTEN AND REHEARSED IN TEREZIN

“The Last Cyclist” is an absurdist comedy originally written and rehearsed in the Terezín Ghetto in 1944 by Karel Švenk, a brilliant young Czech writer/director/actor who was killed shortly before the end of the war in Europe. A bitter allegory, it pits bicycle riders (Jews) against the lunatics (the Nazis) who seek to destroy them. In a non-confrontational, allegorical presentation, it offers a universal warning about the dangers of totalitarian, mass-herd behavior and the extremes to which bullying can lead. This filmed “capture” of her play of the same name has been reconstructed and reimagined by Naomi Patz. In “The Last Cyclist,” a group of prisoners in the Terezín Ghetto rehearse a zany slapstick comedy in which escapees from an insane asylum take over the world. Because they hate their bike-riding physician, they target all bicyclists and the people who sell biking gear and all who have been related to cyclists for generations back, pinning blame on them for every trouble afflicting society. The lunatic leader and her followers exploit the growing anti-cyclist hysteria and plot to eliminate everyone who has anything to do with bicycles by sending them to Horror Island, where they will be not-so-slowly starved to death. A schlemiel of a hero, who buys a bike to impress his girlfriend, becomes the lunatics’ prime enemy. Complications (and subplots) ensue, culminating in the lunatics’ foiled attempt to send the last cyclist into space in a rocket ship. Good thus conquers evil – but only on the stage. In the real world, as the conclusion of the film makes painfully clear, the Terezín actors and their fellow inmates could not escape the Holocaust. “The Last Cyclist” is an example of the extraordinary resilience displayed by concentration camp inmates. Incredibly, it is funny – slapstick funny, even – and was meant to be funny. The audiences in Terezín that attended the open rehearsals laughed and today’s audiences are meant to laugh too. But ours is uncomfortable laughter: first because we realize that what the actors are performing is a brave protest against totalitarianism, and second, because we know the fate of the cast and the rest of the six million Jews murdered during the Holocaust.
“The Last Cyclist” makes clear to today’s audiences that it is the personal responsibility of every human being to fight intolerance, prejudice, bullying and racism.
We are grateful to the Puffin Foundation for a 2017 grant that helped make this film a reality.