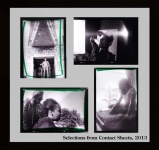 As an artist working in Newark during the past decade, I have recognized the influx of artists, and constant change to the communities surrounding them. The art communities of Newark have expanded, and the goals of emerging artists have started to become realized through City Murals, Newark Open Doors, and consistent gallery and museum shows throughout the year. Now is the time to capture the energy and creative spirit of the people involved in the Newark art scene, as well as the physical sites of studios, galleries, and museums through photographic portraits.

Portraiture through photography is a tool of empowerment. Documenting Newark artists and the supportive community they are apart of acknowledges the importance of their work. By documenting this subject, we have the ability to create a window for the world to view the scope of the Newark art scene now, and for future generations to look back upon.

Taking inspiration from the works and philosophies of Eugéne Atget and August Sander “preserving an imprint of time” while they were documenting Parisian and German workers respectively during the 1920’s, has left a legacy of mankind for us to view and connect with. A window to another era had been created, allowing every viewer access to a different time and space. This is what the Newark Arts Photo Documentary Project will create.

The photographs will be taken with a 1940’s Jem Jr 120 Box Camera, manufactured by J.E. Mergott Co in Newark, NJ. This camera is a simple box camera fitting 120 film with a preset aperture of f16 and shutter at 1/25 of a second, allowing for slower and more deliberate portraiture, in contrast with the hastily snapped frames of an age run by digital cameras.