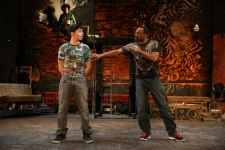 The thesis production of Columbia University School of the Arts director Carl Cofield: THE SEVEN By Will Power.

In THE SEVEN, playwright/composer/old-school rapper Will Power (FETCH CLAY, MAKE MAN; FLOW) upends Aeschylus’ ancient tragedy THE SEVEN AGAINST THEBES in a non-stop rush of rhymes that fuses Greek grandeur with 21st century hip-hop culture. Taking the best bits from both worlds – poetry and music, speech and song, DJs and deities – The Seven spins an unflagging fable about love, war, family, and the way we tell stories. Will Power has taken the tale of brawling brothers Eteocles and Polynices, the two sons of the cursed King Oedipus, and infused it with “heat-generating energy” (The New York Times) to explore such vital themes as race, poverty, and the abuse of power.

THE SEVEN
By Will Power
Directed by Carl Cofield

THE SEVEN played the Connelly Theater in New York City from February 12 – February 15, 2014.