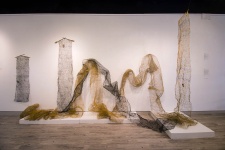 The Trip Wire Project is a multi-disciplinary visual art project that combines, handwork, performance, and video and still photographic documentation including interaction by the artist with the public as it concerns the wars in Afghanistan and Iraq.

Three panels are made from surplus Vietnam-era military trip wire to give a visual and concrete dimension to the statistics of the dead and wounded in the Iraq and Afghanistan Wars since 200. One knitted stitch equals one life lost or wounded for U.S. soldiers who served in the Middle East wars, as well as a visual accounting for dead civilians.

The work is often done outside the studio, knitting on locations between 30 minutes and five hours. The locations echo where decisions were made to enter the wars, where policy was formed, where profiteers profit, and where lies were told to the US Congress, the American people and the world. The artist knitted at the following locations: The Times Square Recruiting Station, The United Nations, the White House, the U.S. Capitol, Northrop Grumman, Raytheon and Exxon Mobile in northern Virginia; the Charging Bull sculpture near Wall Street; at Dick Cheney’s and Donald Rumsfeld’s houses; at the Naval Peace Monument near the U.S. Capitol and The Bush Library in Dallas, TX. are connected to where and by whom decisions were made to enter these wars. I also knit at locations where war profiteers have corporate headquarters.

Documentary video was shot on location along with still photographs of the artist working and discussing the wars with passersby.

The artist kept log books of stitches made for each panel and kept track of all stitches. Her knitting paused with the rise of IRIS. To this day she is still documenting the wounded civilians of Iraq and Afghanistan, as the US has not left these areas. The work has grown to five panels now and will be up to date in May 2021 nearly 20 years after the US entered these wars.


The work evolves and the artist takes the project on location to various monuments. To date the Trip Wire Project was draped on the sculpture American War Mother and her Sons in Philadelphia in2016, the pr