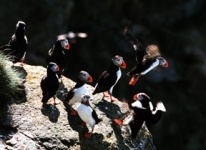 The Veil: Visible &Invisible Spaces is an exhibition of the works of twenty-nine artists, each of whom considers The Veil, its many manifestations and interpretations and puts veils and veiling into context.

Visible & Invisible Spaces intends to engage received wisdom about the veil – particularly current clichés and stereotypes about Islamic practices – and to reflect on the great ubiquity, importance and profundity of the veil throughout human history and imagination. Visible and Invisible Spaces asks artists to investigate the veil in its broadest contexts. The exhibition will be divided into three categories to be interpreted widely: The Sacred Veil, The Sensuous Veil , and The Sociopolitical Veil. Visible and Invisible Spaces is not a documentary exhibition nor a “National Geographic” display of exoticism.

Visible &Invisible Spaces is a visual companion to Jennifer Heath’s edited volume, The Veil: Women Writers on Its History, Lore, and Politics. The exhibition invited visual artists – including videographers, filmmakers and new media artists, as well as painters, sculptors, performance and installation artists – from around the world to investigate and re-vision the veil.

The exhibit has been traveling around the U.S. since 2008.