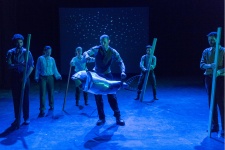 In the hundred years since Charles Darwin published his masterwork ‘The Origin of Species’, he’s become deeply embedded in our social conscience. The Wider Earth is a new production under development by the Dead Puppet Society. It will not be a history play! But a compelling new mythology based on Darwin’s story that exaggerates the facts and focuses on the adventure of his voyage. The production will draw on Darwin’s writings to inspire the creation of puppet characters, moments of visual spectacle and movement in the realisation of a script based on his words and experiences. The work will be contemporary in staging with a focus on scenographic potential to ignite a sense of wonder in the natural world.

Steering away from traditional text-based theatre, The Wider Earth will be highly theatrical, drawing on the performances of a small ensemble of performers in the creation of both the physical language and the narrative of the piece. In addition to adopting characters within the performance, these performers will also function as narrators, puppeteers, and stage hands as the expansive worlds of the show are dreamt to life.

Visually, the scale of the performance will be vast with particular emphasis in development being given to ways in which visual forms of puppetry and projection can be used to play with the scale of the performance space and the vistas portrayed within it. Far from being hollow spectacle, the heart of the show will revolve around the imaginative experiences of young Darwin as he prepared for his grand adventure and navigated the family politics that almost prevented his voyage on the Beagle. As he’s remembered in popular history, Darwin is all too often portrayed as an elderly man, The Wider Earth will focus rather on his experience as a young man; a school drop out whose obsession for natural history saw him throw away the life provided by his parents and ultimately make one of the most significant contributions to scientific thought.