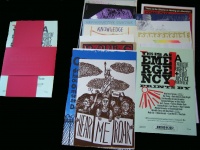 This is an Emergency!

“This is an Emergency!” is a portfolio project combining visual art and writing about reproductive rights and gender justice. This project brings together the voices of those most affected by these issues: women, queer identified, and transgendered folks.
Seventeen artists created a printed image for this project. Several members of the Justseeds Artists Cooperative created images including: Melanie Cervantes, Thea Gahr, Bec Young, Favianna Rodriguez, Mary Tremonte, Molly Fair and Meredith Stern. Additional artists are Erin Rosenthal of Fort Thunder, Ian Cozzens of Secret Door Projects, and Rhode Island emerging artists Kristina Brown, Delia Kovac, Emmy Bright, Lois Harada, Katrina Silander Clark, Arley Rose Torsone, Sam Merritt and Olivia Horvath. Third Termite Press in Pittsburgh, PA printed the colophon and Ladyfingers Letterpress in Providence, RI printed the covers. This project was created in an edition of 125 copies, 22 of which were donated to organizations working on these issues.
The written portion of this project takes the form of a small hand sewn ‘zine. The zine includes interviews with: Judy Kashoff, Gina Glantz, Peg Johnston of the Abortion Conversation Project, Heather Booth who founded the Jane Abortion Collective, composer Ken Rinker, Virginia Reath, Elizabeth Esris, and Judith Arcana who was also a member of the Jane Collective. Susan Simensky Bietila contributed a comic which was originally printed in World War 3 Illustrated. This aspect of the project has an inter-generational component; people in their 20’s and 30’s interviewed their mentors/elders about their personal stories and movement work growing up in the 1960’s.
Nearly two dozen of the portfolios have been donated to organizations working on these issues. They can reproduce the images for use in their campaigns, display them at their events or in their office, use the images on their website, newsletters or other written materials, or to sell the posters as a fundraiser.