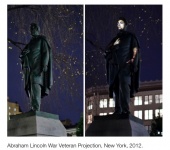 ‘Un-War!’ unravels the mystery behind the radical artist Krzysztof Wodiczko and explores the evolution of his work on conflict resolution and human rights over the past four decades – starting from his first intervention in Poland in 1969.

In the 1980s Wodiczko pioneered his large scale political slide projections onto monumental statues and architecture. He also created tools, which he calls ‘instruments’, that employ technology created specifically for homeless and immigrant survival, communication, empowerment, and healing. By the 1990s he had come to employ video of living survivors of war and veterans to animate prominent facades and statues. The shift from still to moving images facilitated his ability to convey the powerful stories of the silenced: war veterans, immigrants, and refugees. His public art has evolved to employ 3D mapping, which he uses to create astonishing projections and to address critical social issues such a war, trauma, homelessness, and xenophobia among others. These works give the disenfranchised the opportunity to speak about their plights in open public spaces.

The film will feature his work and will focus on four recent urban interventions we’ve filmed between 2012 and 2016, which employ 3D mapping, provide a framework for free speech, and seek to spark change. The film will follow Wodiczko in New York City, Paris France, Kitchener Canada, and in Derry Northern Ireland. At each of these projections we will feature in­ depth interviews with the artist, curators, and project participants, who reveal the impact the work has had on them. Behind the scenes footage reveals how Wodiczko creates these politically charged public interventions by building relationships with individuals and groups, and connecting the audience with his socially engaged art.